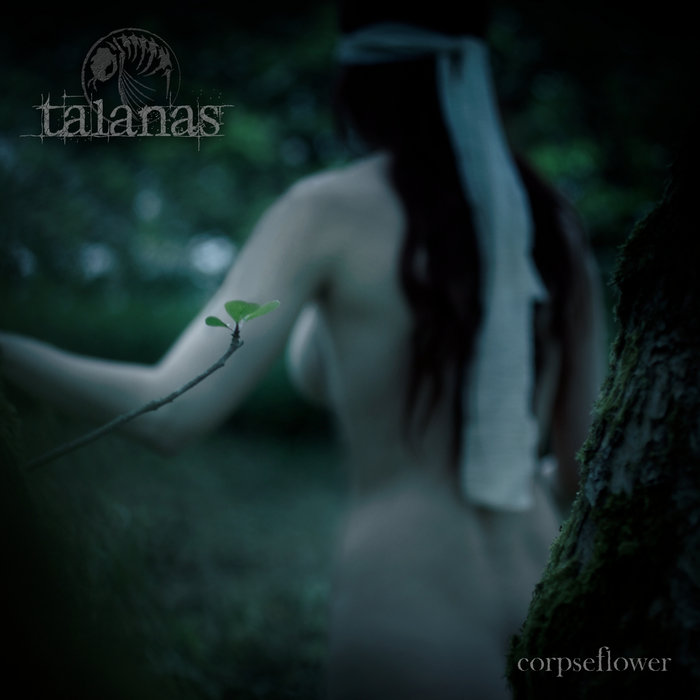 "Not so much a teaser as a savage, darkly absorbing feast for the senses, Talanas’ lovingly-crafted 7” is no ordinary bid to drum up press in the run-up to the English extreme merchants’ hotly-anticipated ‘Daylight’. With each side showcasing the divided extremes of brutality and brooding darkness that define them, ‘Corpseflower’ finds the four-piece on impeccably tight form. In a violent expulsion of blastbeats, lead track ‘Corpseflower’ combines unadulterated death metal with distorted atmospherics to unique effect. While ‘Beloved Whore’ inevitably lacks the energy of its aggressive counterpart, the B-side’s smouldering vocal harmonies and wistful acoustics complete this intriguing ying and yang of a single in haunting,
exquisitely rendered style."
TERRORIZER MAGAZINE

"Much befitting their classy, semi-retro image, Talanas have decided that their next release (available March 1, 2013) is going to be put out on a more traditional format, the 7” vinyl.

Originally developed and released solely on their recent UK/Euro tour with doom legends My Dying Bride, it contains two tracks, both of which will form part of their in-progress second album Daylight. The songs showcase the many varied facets of their gentrified and rarefied death metal sound.

“Corpseflower” itself is a raging piece of diabolic fury and scorching vocal apoplexy, punctuated by eerie melodic counterpoints and swathed in a suffocating shroud of horror and despair. The wrenching growls are supplemented by a faint, despairing thread of clean vocal melody, which switches to take prominence during the track’s rivetingly atmospheric mid-section.

The complex, bone-jarring drumming is certainly impressive, deploying some particularly hammering double-bass salvos and scattergun skin-work as the song progresses, while the song’s intricate, sweeping guitar solo is a prime example of fretboard poetry, employing equal parts melody and dissonance.

Standing as contrast to this is the companion piece of “Beloved Whore”, which practically inverts the structure and focus of its twin, manifesting as a piece of dreamy melody and sepulchral mood. The stronger emphasis on gothic, ghostly vocals and shimmering, smoky ambience exposes the band’s grasp of feel and dynamic, clothing the song’s bare-boned structure with a web of blissful harmonies and chilling auras.

The last minute or so of the track introduces elements of a gothic, blackened sound that reveals the song’s dark side, but marries it to a final clean vocal refrain that provides the piece with a suitably desolate conclusion."
NO CLEAN SINGING

"Often referred to as “The Gentlemen of Death Metal” things have been going rather well for the British quartet. Having played at various festivals such as Bloodstock and Rocktober (Norway) as well as a tour supporting My Dying Bride this two sided recording is set to explore the duplicitous nature of the band’s sound reflecting two sides of their creative coin.

Opening with the thunderstorm of drumming and visceral shriek of ‘Corpseflower’ the heavy droning riffs disperse into melodic passages with growls guiding the track onward with clean vocals playing subtly in the background. The track comes with various different time signature changes, that are signified by complex drum work and vibrant lead guitar solos.

Next up, ‘Beloved Whore’ pervades with a melodic aura that is sensual and richly textured. As the clean vocals take more prominence, the clean guitars utilize some interesting effects with spoken lyrics littered throughout. The drums intensify towards the end as the former growling found earlier returns with filth ridden guitar riffs residing beneath.

Production wise, everything sounds top notch and well refined with the layers of instrumentation and vocals seamlessly co-existing with the finished piece.

Final word, Talanas seem to have the right idea when it comes to leaving you craving for more. Although this offering was somewhat brief, the range of influences and level of depth in their song writing is undeniable.

On the one hand there is this beast-like sound that is set to pull you limb from limb and on the other there is something far more fragile that needs to be nurtured and re-visited.

If these two tracks are anything to go by then you can expect some serious waves to start crashing into the Metal scene with their next full length record. Fantastic work guys!." 4.5/5
METAL-RULES

"After touring extensively in support of their last release The Waspkeeper, sartorially sharp Londoners Talanas are back with a new 7” vinyl release (also available as a digital download) entitled Corpseflower. Quoth frontman and guitarist Hal:

“We needed to spend some time away from the stave, so to speak. We released ‘the waspkeeper’ straight after ‘reason and abstract’, it even contains songs from the same sessions, so it was important for us to get out on the road and understand how we perform as a band rather than just four chaps bringing riffs to the table.”

So, has this break to find themselves as a unit radically altered the band’s sound? No, not really. If you liked The Waspkeeper and Reason and Abstract, you’ll definitely find a lot to like in the two tracks on Corpseflower. Talanas are still very much the smart, introspective death metal band, with a generous helping of doom and black metal sensibilities that they were when we last heard from them. The two songs on offer here are easily identifiable as being from the same source, but are quite disparate in terms of style; two sides of the same coin, if you will. This was apparently intentional, the band stating that they wanted to use the A/B format of 7” vinyl to showcase the duality in their songwriting.

Opener ‘Corpseflower’ crashes right in with dischord riffs and blastbeats before giving way to a more understated verse riff. Vocalist Hal Sinden’s range of styles is impressive, flitting between pleasantly saturated gutturals, strangled shrieks and some unsettling clean harmonies. Following the initial burst of aggression, the song is laden with crawling menace, the band’s Akercocke references clearly audible in the tonalities on offer and the vocal melody in the chorus, finishing up with a couple of tasteful yet technical guitar solos and the job’s a good ‘un, as they say.

Where ‘Corpseflower’ is brooding and malevolent, B side ‘Beloved Whore’ is cold and bleak, showcasing Sinden’s theatrical cleans to a greater degree. The sorrowful chorus and layered clean guitars draw on the band’s doomier influences, evoking loss and the slipping away of summer.

As a stand alone release, Corpseflower is brief. Clocking in at about ten minutes, it will leave you wanting more, which is probably the best compliment a reviewer can give to a band. If you’re already a fan dive right in, if you’re not and you like progressive death metal, Corpseflower is a fine introduction to the band. Recommended."
ONE METAL

All music by Parry, Sinden, Butterworth & Duffy. All lyrics by Sinden.

Artwork photography by Dave McKean in Ebony, Kent in May 2012. Band photography by Ross Wildish in Hampstead, London in October 2011. Sleeve & label artwork by Hal Sinden for Eulogy Media Ltd.

The Hammer and The Relentless from the Boston band Malleus stop by for a chat.